In Canada, natives and certain groups have the right to hunt for eating purpose at all times. Those rights to hunt comes from past treaties agreed between different nations and the Canadian government and are recognized by the 1982 Canadian constitution.

Hunting is the action of following a wild animal (also known as “game”) to capture or kill it for utilitarian purposes or for sport. Hunting was once a subsistence activity (for food and clothes, to stay warm – for example, with fat from marine mammals – or to fend off predators that were dangerous to man or livestock). With the emergence of large-scale farming and the modern market economy, hunting has become a mostly commercial or sporting activity.

Hunting is subject to a set of rules and regulations such as age limits for hunters, licence requirements, hunting zones and seasons, as well as bag limits, which are established by competent authorities. These rules are designed to protect animal populations and allow distributing catches among hunters. Rules are enforced by provincial game officers and federal agents, including the RCMP. Those who do not respect the rules may be charged with poaching.

Hunting and trapping are ancient practices. Remains of hunting tools have been found in Neanderthal archaeological sites. It is thought that certain prehistoric populations practiced specialized hunting, concentrating on a single species of animal, which may have lead to the extinction of several species.

Hunting methods have evolved over the centuries. Different human populations have used clubs, deadfalls, trenches, spears, harpoons, traps, nets, boomerangs, knives, blowpipes, bows, and firearms. Dogs, horses, or both were also used in the past, and continue to be used today to track game.

In North America, Inuit and some First Nations peoples used to track game along its migratory routes, which could explain their nomadic lifestyles. However, due to urban development and transportation infrastructures, this practice virtually no longer exists as most of the animals are now limited to specific geographic areas. 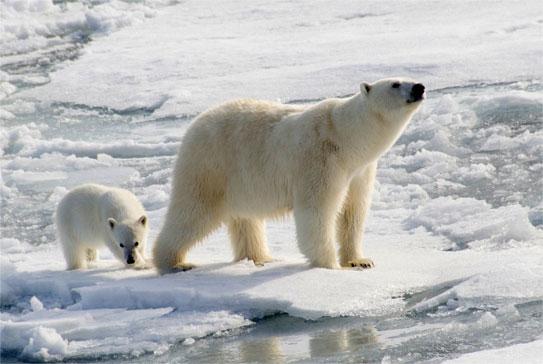 Commercial hunting developed at the same time as commerce itself. In its early days, it consisted mainly of local bartering between hunters. Over time, it grew into a larger scale practice. Products from commercial hunting include feathers, hides and furs, meat, walrus and elephant ivory, as well as other products used in Asian medicine, such as bones, antlers, and gall bladders.

Although this type of trade has existed for centuries, overexploitation has only recently become a problem. The excessive demands of our society can only be met with highly effective hunting, transportation, and commercial practices. Numbers of species that provide some of the most sought-after products are declining (e.g. the sea otter), even becoming endangered due to poaching (e.g. the rhinoceros, elephants, whales, sea turtles, and the Canadian black bear). Commercial hunting for down and feathers decreased over the last century after strict import regulations were imposed in Europe and North America. However, whale hunting still constitutes an important economic activity for many Indigenous populations.

With some exceptions, populations of fur-bearing game tend to remain constant despite hunting. The fur trade continues to be viable even with changing fashion trends. Hunting for fur seems to raise mainly moral and philosophical questions rather than questions about the availability of resources. For example, the European embargo on Canadian furs was imposed because of the type of trap used by hunters. 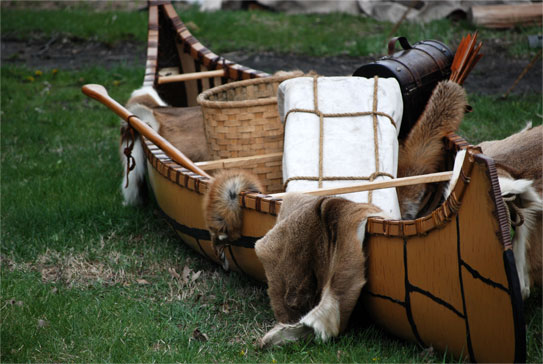 Recreational hunting is allowed everywhere in Canada, except in national parks and wildlife reserves. Most game animals are managed by provincial governments, with the exception of the Migratory Birds Convention Act (MBCA), which is under federal jurisdiction and administered by the Canadian Wildlife Service, with the support of the provinces. According to the law, wild animals are public property until they are killed or captured, but the authorization to hunt on private property belongs to the property owners. 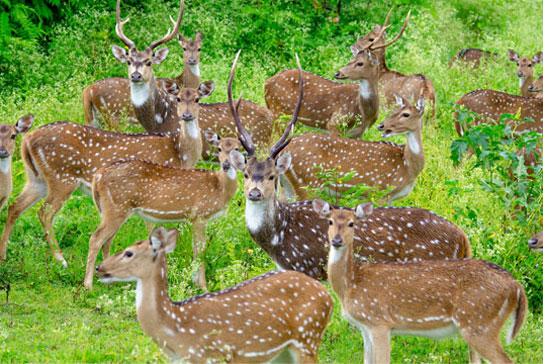 With its magnificent landscapes and diversity of wild game, Canada attracts hunters from around the world. Nothing compares to the spectacle of flocks of snow geese dispersed by rifle fire in James Bay. A moose with its magnificent antlers appearing in front of you on a beautiful fall day is an unforgettable experience, as is hunting for grizzly or polar bears in springtime for bolder hunting enthusiasts.

Traditionally, the most commonly hunted large game animal in Canada is the moose, but in more populated areas the whitetail deer is the most widespread species. Previously mostly limited to the Eastern provinces, it can now be found as far as British Columbia. The elk, which once populated the Western provinces and some parts of Ontario and Québec, can now be found in central Manitoba and the Western Cordillera. As for the moose, it lives abundantly across Canada, including Newfoundland, where it was first introduced in 1904.

The woodland caribou is plentiful in the boreal forest, but its natural habitat in Western Canada is being pushed back due to forest harvesting. The caribou herd living along the George River is hunted by both residents and non-residents. The pronghorn antelope, bighorn sheep, Stone or Dall sheep, the mountain goat, and the muskox are hunted locally. Among other huntable species of note are the black bear, the polar bear, the grizzly, the grey wolf, and the puma.

In addition to migratory birds, Canada is also home to several sedentary species of game birds, for example, the ptarmigan of the arctic tundra and the prairie sharp tailed grouse. Their populations vary from year to year, as do the grey partridge and pheasants, which are introduced species. The size of some species’ populations, such as the ruffed grouse, are cyclical and seem to parallel populations of snowshoe hares and their predators.

For many hunters, hunting migratory birds is tradition. In 2016, approximately 1 million ducks and 980,000 geese were killed. 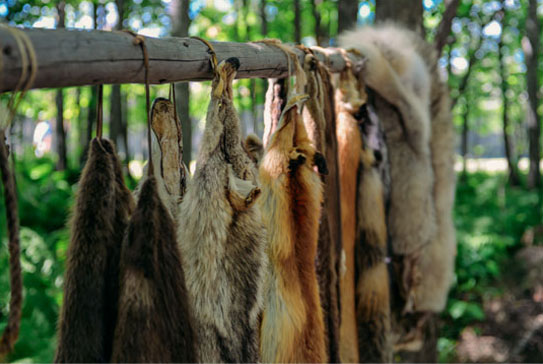 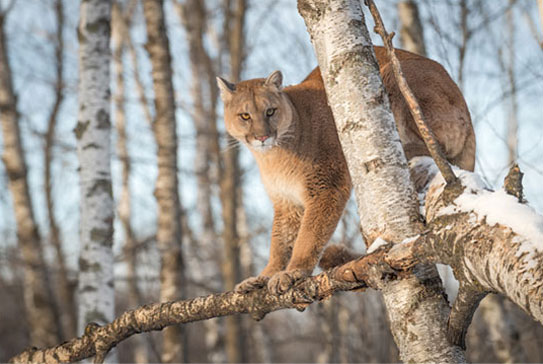 By definition, trophy hunting is a competitive activity the goal of which is to catch the biggest specimen possible. In North America, the criteria for obtaining a hunting trophy taken with a firearm is determined by the Boone and Crockett Club that names competent judges whose task is to decide if a specimen was caught fairly. The club also decides whenever a dispute occurs and sets the standards. The Pore and Young Club has a similar system in place for game hunting with bow and arrow. 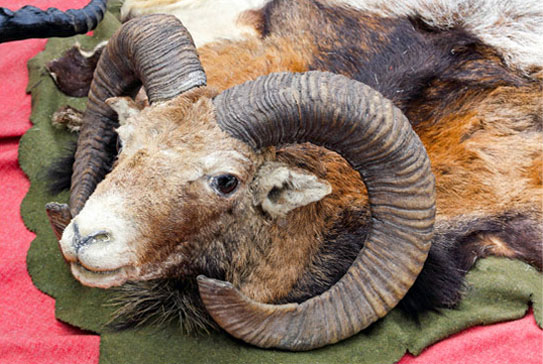 Anyone who wants to hunt in Quebec, whether with a firearm, a crossbow, a bow, or by trapping, must first obtain a hunting certificate. To obtain a certificate, one must be a resident of Quebec for at least 183 days and over the age of 12 years. Additionally, individuals must complete training according to the type of certification desired. Below the age of 12, children can obtain an initiation licence to accompany a hunter who is at least 25 years of age.

Quebec attracts many hunting enthusiasts. Its varied wildlife offers plenty of opportunities to hunters. In fact, the number of recreational hunters continues to remain stable in the province with 470,000 to 535,000 licences granted annually to residents of Québec. In 2011 (the most recent data available), Quebec hunters hunted an average of 15.2 days. According to the Fédération des chasseurs et pêcheurs du Quebec, the number of new hunting enthusiasts has increased 43% over 10 years; 26% of these new hunters are women and 22% are minors, ensuring a new generation of hunters.

However, the last 15 years has seen a decrease in foreign hunters to Quebec hunting outfitters. The number of hunting licences sold to non-residents has decreased by 60% since the year 2000, from 23,000 to 9000, approximately. This can be explained in part by U.S. standards on the repatriation of game meat, which might discourage Americans from crossing the border to hunt in Canada.

Once a certificate is obtained, individuals can request a hunting licence authorizing them to hunt a specific animal during a given time of year. This licence must be renewed yearly. The cost and conditions depend on the hunting zone chosen.

Québec is divided into 7 districts and 29 zones (28 for hunting and 1 for fishing), some of which are subdivided into sectors. Delineating hunting zones allows protecting local ecosystems and ensuring maintenance of game populations (for example, grouse and snowshoe hare populations vary significantly from one year to the next).

Conservation efforts for wetlands and migratory bird populations supported by governments and Ducks Unlimited (a private organization) must be maintained. The end of the 20th century has seen the emergence of a wave in favour of environmentally responsible hunting to protect wild game species and their environments.

In Quebec, it is estimated that approximately 300,000 people hunt, making it an activity with substantial economic benefits. According to one survey from the ministère de la Faune, the hunting industry generated nearly a half a billion dollars in the province in 2012.

In 2017, just in Quebec, 27,631 moose, 53,010 whitetail deer, and 5236 black bears were captured. Wild turkey is also gaining in popularity in Québec with the number of permits granted since 2008 increasing fivefold, and the number of catches increasing from 584 in 2008, to 7796 in 2017. On its own, wild turkey hunting now generates millions of dollars in economic benefits. 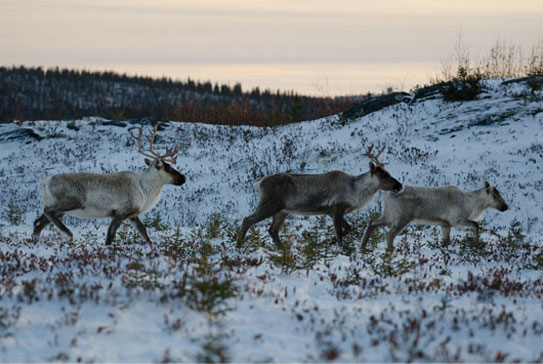